Back in January, I brought my Morphite 155 quad-copter on a trip with my family to Nevada and Utah with the intent of exploring the beautiful landscapes from a birds-eye view. I had my first opportunity to take flight just outside the Valley of Fire state park. And what a flight it was! As I soared past sandstone and brush from the virtual cockpit of my palm-sized robotic flying steed, I was reminded of just how rewarding this hobby can be. Unfortunately, my first flight was also my last flight of the trip, as I crashed the little guy into a tree and broke a solder joint on the antenna, rendering the video feedback useless.
As much as I love building and flying my drones, I can't deny that they are fragile creatures. And flying without crashing would be about as interesting as playing a video game and staying at the spawn point. So I set out to make my drone as near-indestructible as possible.

The plan was simple - to build a 3D-printable enclosure to protect the electronics, and provide strain relief for the video transmitter's antenna. Armattan was nice enough to provide CAD files for the frame, making the job of modelling the machine digitally a whole lot easier. The first step was to measure and model all of the components and place them in a Solidworks assembly. 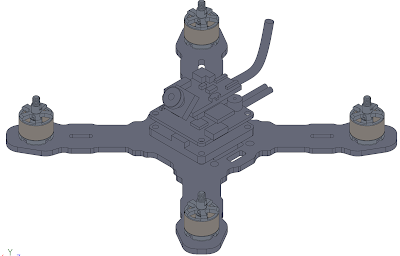 Then I made an open-ended box to cover the sides of the component stack, with holes cut out for access to the USB port and to allow wiring to the motors and battery. This box also forms half of the sandwich that will eventually hold that antenna solidly in place. 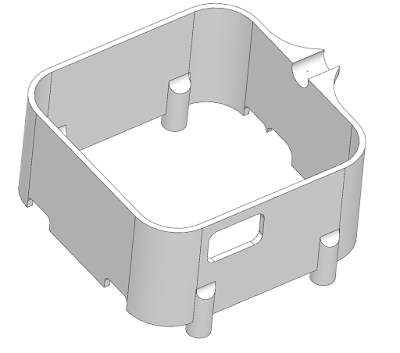 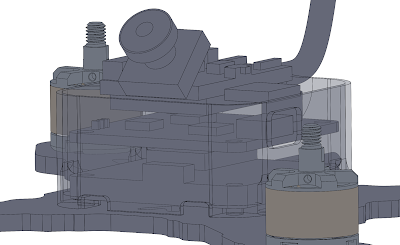 Now we come to the hardest part - I wanted an organic shape for the top of the pod, and anyone that's used Solidworks knows that compound curves and shapes don't come easy. I used a Loft feature with a number of guides and profiles to pull this part off. 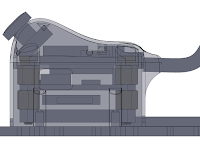 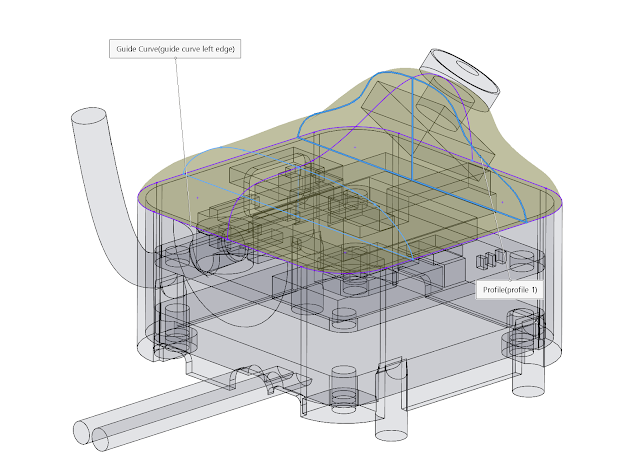 Adding bolt holes, support structure, and a mount for the camera was fairly straightforward. At this point, I was starting to get pretty sick of the modelling shtick, and ready to see how the design looked in real life! So I sent it off to the wizards at Lehigh's Additive Manufacturing Lab to get printed on their Stratasys Objet 30 Pro, which uses a photo-polymer resin and, importantly, a soluble support material. The support material is fairly essential due to the hollow nature of these parts. 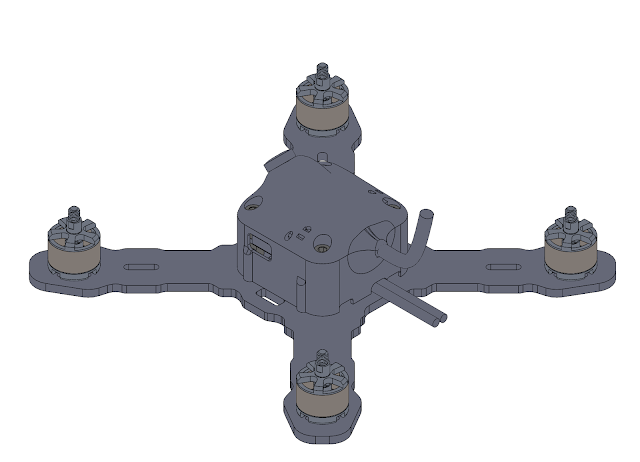 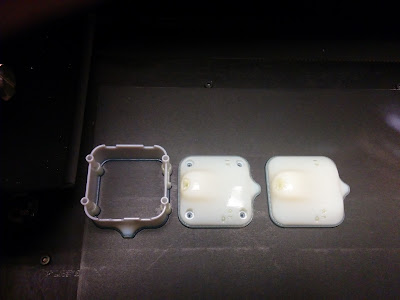 Here you can see how the parts came out of the printer, before the support material was removed. Below is the assembly process of the quad-copter - even though I all the parts were carefully dimensioned, it was a pretty tight squeeze to fit all the electronics inside. I also accidentally snapped the lower box-shaped part while attempting to make a bit more space for the battery leads to exit. A picture is worth a thousand words, and this time I remembered to snap a few of them during the assembly. Take a gander below. 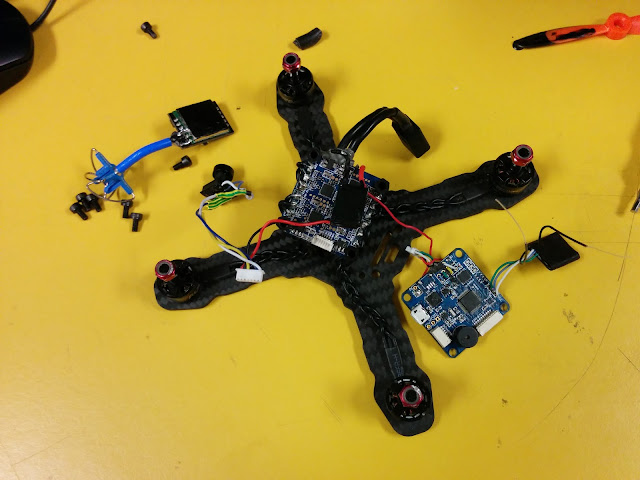 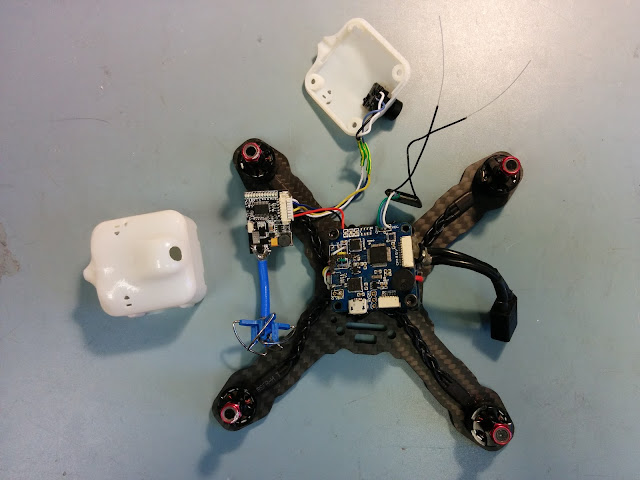 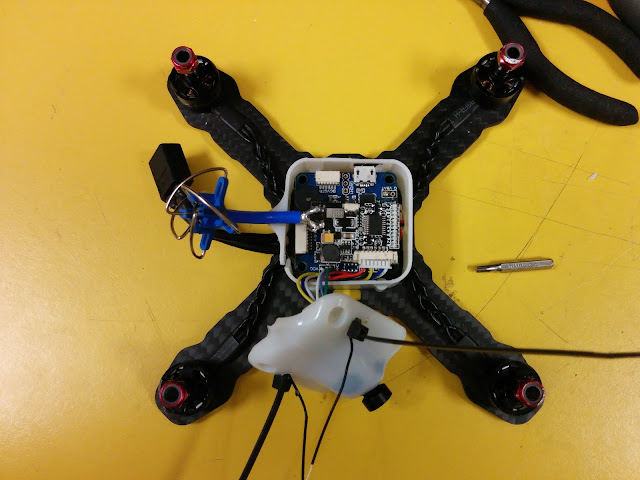 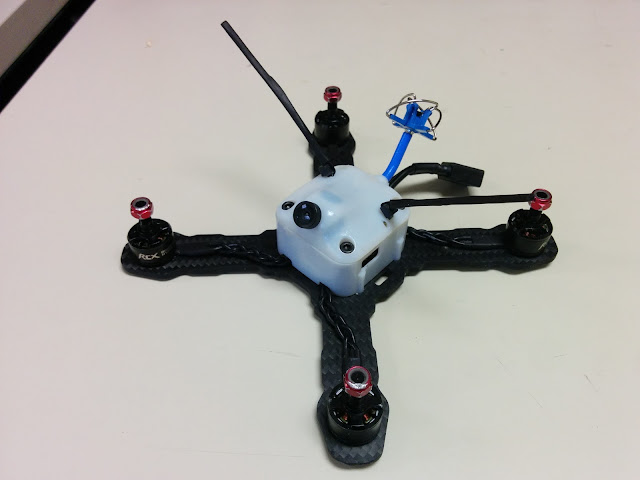 Pretty sweet, huh? The design isn't yet ready to be shared with the world, as I need to fix some flaws (namely the lack of venting to cool the video transmitter), but it's been a fun project so far, and a good excuse to sharpen my solid modelling skills and play around with 3D printers. As soon as I find some time, I'll make some upgrades to the design and print out a new revision. 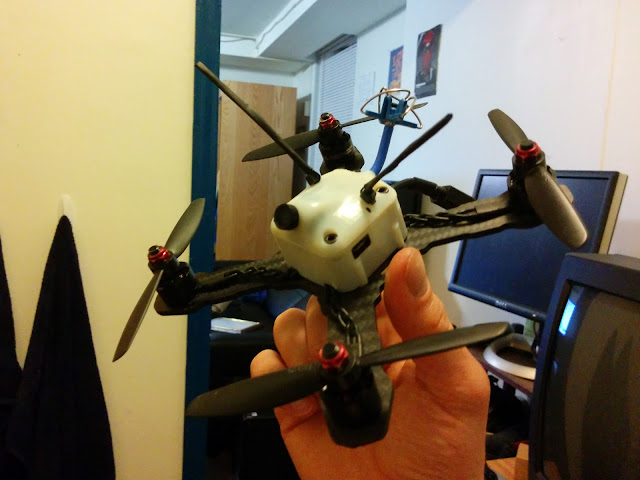 Let me know what you think!
Posted by Adam Weld at 1:40 AM

Email ThisBlogThis!Share to TwitterShare to FacebookShare to Pinterest
Labels: morphite